It is the most important military construction in Ferrol. Located opposite La Palma Castle (in Mugardos) and the former castle of San Martiño, the three fortifications made the Estuary of Ferrol impregnable – a sort of  “triangle of fire” that no enemy power dared to attack. At night, the castles of San Felipe and La Palma were linked by a chain in order to prevent the passage of enemy ships. Admiral Pitt was reportedly quoted saying that if Britain had an ría like this with its castles, they would protect it with a silver wall.

In 1557 the construction of the castle began sponsored by Philip II, from which it takes its name. All in all, the building that is preserved today is from the 18th Century, when its last major renovation took place. The main works of the castle were finally finished in 1775. San Felipe is considered to be a 18th-century example of a “bulwark-filled battery”. This design had, on the one hand, a zone of cannon batteries directed to the sea, and on the other hand, a system of bulwarks -or protruding walls- covering the flanks of the curtains (the front walls).These bastions were used to repel attacks by land.

San Felipe is in constant process of restoration. It surprises visitors both for its constructive scheme and for the beautiful views of the estuary that can be seen from its location. 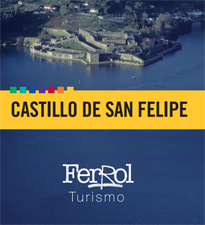